There are three kinds of mental practice:

Visual imagery is when a mental image is constructed by bringing in pictures or visual scenes to their mind. They are imagining a particular photograph or a particular visual scene in their mind. Kinesthetic imagery is constructing mental images by feeling the movement. For example, this could be running their fingers through various fabrics. In their mind, they feel the softness of the fabric. By feeling the movement, they would imagine that kind of experience in their mind. The last type of mental practice is motor imagery, which is also synonymous with mental practice. Motor imagery, or mental practice, is going to be the focus of our presentation.

What is Mental Practice?

Mental practice is the cognitive rehearsal of a motor task in your working memory without actually producing that motor task (see Figure 1). 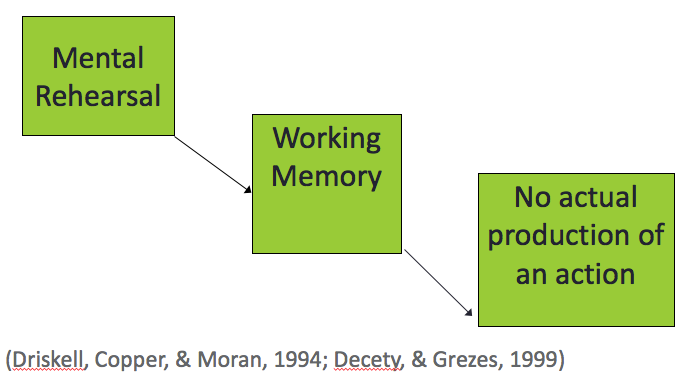 For example, you will think about lifting a glass off of the table without actually raising your arm. In a typical scenario, you close your eyes and think or imagine a motor task without actually making any voluntary movement. It is the cognitive rehearsal and not the motor rehearsal of a task in your working memory. Again, you are not making any voluntary movement while you are engaged in mental practice.

The major theory that has been cited in literature when discussing mental practice is the Simulation Theory. Simulation theory states that all actions or all motor tasks have a covert stage. A covert stage has an objective of a motor task. It should also have the resources of how to carry out that motor task. And, lastly, what will be the effect of that motor task on the individual and the environment. Simulation theory says that even when you do not carry out the voluntary movement but you would like to imagine that motor task, that motor task has a hidden stage that has all the things present to initiate and carry out that motor task. The resources are there to carry out that motor task without making any voluntary movement. It also anticipates the effects of the motor task on the environment and the individual. Again, this is all happening in your mind; you are not making any movement. The simulation theory also states that neurological similarities exist between the states in which the task is simulated and in which the task is carried out. So the two states, the simulation state, which is the mental practice, and the execution state, which is the voluntary movement of a task, combine or join together when it comes to the brain areas. The brain areas involved in the simulation of the task are pretty much the same that are involved in the execution of the task. You will learn more about it as I go through the PowerPoint.

Here are some of the neurological constructs, or brain areas, that are involved in mental practice, and that are equally activated when you are carrying out the voluntary movement.

The first area is the dorsolateral prefrontal cortex. Some of you might be familiar that the dorsolateral prefrontal cortex is part of the prefrontal cortex, and it is mainly involved in cognitive and executive functioning for planning and initiation. Some of you might also know that the prefrontal cortex is the last one to mature. This might not be until a person reaches 23 years of age. We need to go back and remember Piaget's theory that children do not learn abstract thinking up until the age of seven. We need to keep this in mind when we are devising interventions for our pediatric clients as they may not grasp those instructions fully. The second area that gets activated simultaneously when you are carrying out the movement and when you are engaging in mental practice is superior and inferior precentral sulcus. It is the largest groove on the brain and involves the Broca's speech area. The cerebellum is another area, and as most of us know, the cerebullum is involved in the regulation and coordination of the movement, especially balance and posture. The left putamen is another motor area. It is involved in the various stages of the tasks from preparation to execution. The last area is the left supramarginal gyrus that is involved mainly in the observation of actions and somatosensory association. When we are actually carrying out the movement, all of these areas are involved in both imagining the task and carrying out the task.

The areas that now I am going to discuss, they are only involved when you are making the voluntary movement according to the literature.

Some of you might be familiar with homunculus, which is the somatotopic representation of our body areas on the brain. The hand and arm have the largest representation in the brain in the homunculus, and most of that representation is within the precentral gyrus. This is the primary motor cortex or the M1. Cerebellar vermis is another area which is involved in fine tuning of the movement. The superior parietal lobe is mainly involved with spatial orientation. Lastly, the right posterior central gyrus is the main location of the primary somatosensory cortex.

How/Why of the MP: fMRI Studies of Piano Players

This is the piano study that I am going to discuss which makes things clear about the neurological constructs that are involved in mental practice and voluntary movement (Meister et al., 2003). Back in 2003, Meister and colleagues carried out a study with 12 college students. They wanted the college students to use their right hand to play a symphony on the piano. They were all right-handed students, and they were not allowed to use their left hand. They captured that playing or the movement of the keys by using functional magnetic resonance imaging. They also asked the participants to imagine the movement and also captured that using neuroimaging. They recorded what brain areas were involved for both imagining and playing the piano. They noticed that the brain areas that were activated were the same during the mental imagery and the voluntary movement. As we move through the presentation, many other studies will suggest the same thing. This supports the Simulation Theory.

Studies have suggested that there is a tight temporal coupling between imagined and executed actions. Besides having the same brain areas involved, the time to carry out the voluntary movement, and the time to imagine that movement, is pretty much the same. A lot of studies, using a mental chronometry paradigm, show that the time to actually carry out the movement and to imagine that movement is the same. Studies have also suggested, which I have alluded to before, that the internal representation of the movement is available to conscious awareness, while the overt action, or the while the voluntary movement, is restrained. This is so important, and that is why I need to reiterate it. Mental practice employs some of the same neural brain regions that are involved in the actual carrying out of the movement, but that is also active in visual perception. I am mentioning that because later in the presentation I will talk about a handwriting study that will show the importance of mental practice. Another new concept is that mental practice uses the same areas that are active in visual perception. 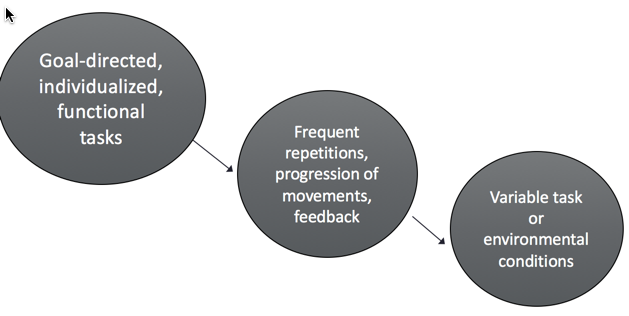 When you are engaging a client in an occupation, most of the time you are engaging the client in the same occupation that the client has deficits in. For example, if the client has deficits in tying their shoelaces, you will engage the client in tying their shoelaces. Another example is that most stroke patients have range of motion that is limited. Besides doing range of motion and strengthening exercises, you might have them practice lifting a glass off of a table. This is what repetitive task practice is about. You use goal-directed, individualized functional tasks with a lot of practice, frequent repetitions, and a gradual progression of the movement. First, they may reach for the glass, then hold onto the glass, and finally be able to lift it. It is a gradual progression of the movement within variable tasks or environmental conditions. You may do that with a client in his or her room and then maybe take it to the dining room. Another example may be that you are teaching the client how to button the shirt. First, you practice the fasteners on a board. Then you use a shirt off of their body. Finally, they practice buttoning the shirt while wearing it.

Most of us are interested in improving children's handwriting. Although we need to be very aware that we are not engaging the children to just perform handwriting because that is not our goal, that is the teacher's goal. Our goal is that if the child has deficits we need to help them to improve their performance and participation, and that is a very important distinction. Handwriting Without Tears (now known as Learning Without Tears) was developed by Jan Olsen in 1999. She was an occupational therapist, and she saw her son struggling with handwriting tasks. It is a developmentally based handwriting program. There are various books, and the child advances at his or her own pace. The child is involved in the frequent repetition and practice of handwriting. For example, the child learns to write the capital letter F, and then they learn to write the lowercase letter F. They then combine those letters in sentences. The work progresses in variable task and environmental conditions. There is a progression of movement, and the teacher or occupational therapist provides feedback to the child, which is another main component of repetitive task practice. Thus, Handwriting Without Tears is very much based on repetitive task practice principles. 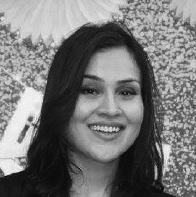 Ghazala T. Saleem is a current postdoctoral fellow at Kennedy Krieger Institute/Johns Hopkins University School of Medicine. She is also enrolled in global clinical research training program at Harvard Medical School and is expected to complete this program in May 2018. She earned her research doctorate in movement sciences from Teachers College, Columbia University and her Master’s in occupational therapy from College of Physicians and Surgeons, Columbia University. She is a trained/licensed occupational therapist with extensive clinical experience in pediatrics and neurological disorders. Her research interests include conducting translational research (efficacy/effectiveness studies) to improve occupational performance in individuals with neuromotor disorders, especially children.

1 https://www.occupationaltherapy.com/ot-ceus/course/joint-hypermobility-syndromes-assessment-and-5376 Joint Hypermobility Syndromes: Assessment and Intervention This course will cover upper extremity assessment and treatment strategies for the pediatric/young adult population affected by joint hypermobility syndromes. The treatment focuses on both orthopedic strategies along with adaptive methods for these individuals. auditory, textual, visual

4 1022
1022 Reviews
AOTA/0.1 Advanced, OT Service Delivery; CE Broker/1.0 Home Study, General (FL), Patient Related (AL), General Continuing Education (GA), Direct Client/patient Services In Occupational Therapy (SC), Related To OT (AZ), Related To OT (LA), Directly Related To OT (MS), Directly Related To OT (TN), CE Broker #20-633616; IACET/0.1; IBCCES/1.0; NBCOT PDUs/1.25 Advanced, Rehabilitation
View CEUs/Hours Offered
With current research advances in neurology, practitioners must revisit the evidence for best practice and to enhance intervention techniques for addressing the challenges of Autism. This course reviews Dr. Gibbs’ Self-Regulation and Mindfulness 7-level Hierarchy, the CIS method for contextual intervention, and the nine targeted interventions to address the nine senses.
Course Details
4 https://www.occupationaltherapy.com/ot-ceus/course/tablet-applications-2318 Tablet applications Tablets are a hot item and are being used more and more with clients who have physical, verbal or cognitive limitations. New Apps are coming out all the time, but this course will present some that are being used with clients who have autism, are non-verbal, or have cognitive limitations. These Apps can increase participation, education, communication, recreation and independence. auditory, textual, visual