Chronic obstructive pulmonary disease (COPD) is a condition that all of us are familiar with, however, pulmonary rehab is traditionally a place where few OTs exist or practice. Currently, the literature on best practice for COPD management has been clamoring for an individualized approach, as each COPD individual is unique in their needs. This is where we step in as OTs. To best serve the needs of this population, it will be very important for us to know the disease process itself, as well as, the ways that we can help these individuals with COPD.

COPD, in the realm of pulmonary diseases, belongs in the category where individuals are able to get air in but they have difficulty with getting the air out of their lungs. It is a disease that is common, preventable, and treatable. It is a mixture of alveolar abnormalities and small-airway diseases. There are different subtypes of COPD, as this is an umbrella term. An individual may present primarily with emphysema or chronic bronchitis symptoms and sometimes a mixture of both. To help us visualize how all of these may be different from each other, let's look at our respiratory system up close in Figure 1. 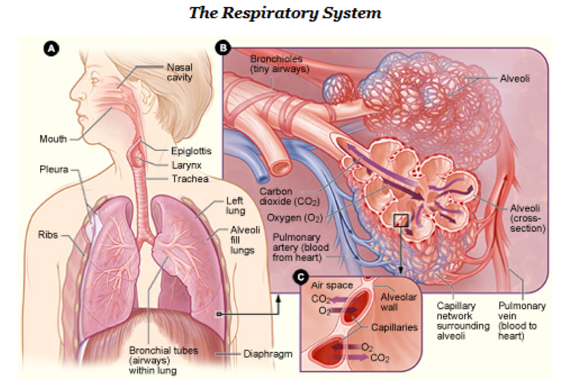 With emphysema, the airways will be chronically inflamed and narrowed, and there will be a reduced number of tiny airways that are participating in air exchange. The alveoli will have wall destruction, and instead of them being very small, they become bigger, thus reducing the surface area that participates in air exchange. In chronic bronchitis, there is mucus hypersecretion that blocks the airways and the ability of the air to flow out because of the mucus plugging.

What are the risk factors for developing COPD? Worldwide, it is mostly accepted that the main risk factor for COPD is tobacco smoking. However, non-smokers may also develop COPD. It can either result from exposure over time to noxious gases and particles. It can also be a result of an individual's genetics, airway hyper-responsiveness, or poor lung growth during childhood. Other risk factors are outdoor and indoor air pollution, from burning wood or other fuels used for cooking and heating in a poorly ventilated area. And, if you work in an environment with organic and inorganic specks of dust, chemical agents, and fumes, this is considered occupational exposure and a risk factor. This may surprise everybody but the female gender is actually a risk factor for developing COPD. It is largely unknown why, but it could be a combination of different factors such as the airways of women being relatively smaller. So, if they smoke cigarettes, there is more concentration of cigarette smoke. It could also be from the different way that they metabolize cigarette smoke or a different inflammatory response to cigarette smoke. Age is also a risk factor. As we age, there are age-related changes in our respiratory system, and this may increase our risk of developing COPD. Socioeconomic status is also consistently associated with airflow obstruction and an increased risk of developing COPD. This may be due to exposure to indoor and outdoor air pollutants, crowding, poor nutrition, infection, or other factors. Asthma and airway hyperactivity has also been linked in studies to a 12-fold higher risk of acquiring COPD. Chronic bronchitis may also contribute to the frequency of total severe exacerbations, and infections can also reduce the lung function and increase respiratory symptoms.

What happens when we have COPD? First, it is the airflow limitation and gas trapping, or air trapping. As our airways are inflamed, the fibrosis reduces the FEV1, or the forced expiratory volume, in one second or the FEV1 over the FVC ratio, which is the forced vital capacity. So, forced vital capacity is the amount of air a person can exhale during a forced breath. When exhaling, limitations in the peripheral airway reduces the amount of air that can be exhaled and this leads to hyperinflation. There are two types of hyperinflation, which we will be discussing later. Hyperinflation develops early and is the main mechanism for exertional dyspnea or shortness of breath. Bronchodilators reduce gas trapping, and that is why it is very important to know how bronchodilators affect a client's ability to breathe and function.

COPD also results in gas exchange abnormalities. When you have COPD, it typically results in hypoxemia or an abnormally low level of oxygen in the blood. It also causes hypercapnia, which is carbon dioxide retention, CO2 retention, and abnormally elevated carbon dioxide levels in the blood. There are several mechanisms that contribute to this, but primarily, gas exchange, or the ability of your body to exchange oxygen for carbon dioxide, decreases as the disease progresses.

Pulmonary hypertension may develop late in COPD, and this is due to the hypoxic vasoconstriction of small pulmonary arteries.

There are different tests that you will encounter as you are reading through a person's chart. Spirometry is the gold standard for COPD diagnosis. In spirometry, they measure the lung volumes and the diffusing capacity. The frequent results and terms that you will see will be the forced vital capacity, or the FVC, the forced expiratory volume in one second, or the FEV1, as well as, the FEV1/FVC ratio. To have a diagnosis of COPD, the FEV1/FVC ratio should be less than 70% of the predicted for the population with the people that are matching your age and your gender. Chest imaging, such as chest X-rays, CTs, and MRIs are also used, as well as ABGs (arterial blood gas), and this is very helpful in determining if a person is hypercapnic, or a CO2 retainer with elevated CO2 in the blood.

There are different ways of classifying COPD. The classical way is through the use of the FEV/FVC ratio, which is something that the GOLD or the Global Initiative for Chronic Obstructive Lung Disease Organization has used. However, we know that participation or an individual's appearance or symptoms are more than their FEV/FVC1, so just to familiarize yourself, these are the different GOLD stages and what it means in terms of the FEV1 values.

COPD can also be described in terms of symptoms. We will be discussing three commonly used assessments.

Since COPD is a disease characterized by breathlessness, the Modified British Medication Research Council, or the mMRC questionnaire grades the breathlessness a person experiences. It is from zero to four, and these the different levels that you have. So it comes from breathless only with strenuous exercises to being breathless as they are leaving the house or when they're or dressing or undressing.

The next one would be the CAT or the COPD Assessment Test. This is a comprehensive assessment of symptoms. The patient reports on the impact of COPD on their health status. There are eight questions that ask about the quality of their cough, phloem, chest tightness, breathlessness when walking up a hill or a flight of stairs, activity limitations at home, confidence in leaving their home, sleep, and energy. It globally looks at the patient's day-to-day activities on a scale of one to five. You score it from zero to 40, with the higher scores indicating more impact of COPD symptoms on their health status.

The other questionnaire is the Clinical COPD Questionnaire or what they call the CCQ. This is a 10 item health quality of life questionnaire and quantifies the clinical status of the airways. It also gives an understanding of the activity limitations and emotional dysfunction experienced by an individual. It has three domains: symptoms, functional state, and mental state. It is graded from zero to six, with zero being the least impaired and six is the worst impairment. It usually takes two minutes to complete, and there is a minimal clinical difference improvement of minus 0.4 points. In order to indicate that the person has improved, their score, or clinically important difference, must decrease by 0.4 points.

Now recently, as they have compiled research on COPD, they have realized that categorizing COPD is really more than a client's ability to forcefully exhale, air out from their lungs in one second. In response, they have developed this GOLD Combined COPD Assessment into categories from A to D. GOLD stands for the Global Initiative for Chronic Obstructive Lung Disease. It involves the spirometry or the severity of their airway limitation, their dyspnea assessment with either the mMRC or the CAT, the history of moderate and severe exacerbations, and prior hospitalizations, the degree of airflow limitation, and then, the symptom burden and risk of exacerbation. To make it easier for everybody to understand, I have plugged these areas into each of the boxes in Figure 2.

The GOLD 1 to 2 categories, or A and B, are the individuals that are experiencing fewer symptoms either with dyspnea or have less of an impact of COPD on their quality of life. Then on the top levels, these are those that have had experienced exacerbations two or more times every year.

The Bode Index is an assessment of COPD severity and prognosis. It calculates the individual's risk of hospitalization and death from COPD. The calculations are based on the FEV1, the Six-Minute Walk Test, the mMRC, The Dizziness Scale, and the BMI. It predicts survival in four years based on the points. There is an online calculator where you plug-in the points, and it gives you the result.

The COPD Foundation has developed its own system as they recognized that there were different ways of classifying COPD. They also wanted to recognize that sometimes the results of the tests do not indicate whether a person has COPD or not. Their staging system provides recommendations on who would benefit from spirometry tests and provides therapeutic recommendations. The domains are based on the assessment of spirometry, the regular symptoms that the person experiences, the number of exacerbations in the past year, their level of oxygenation, the degree of emphysema that they have seen on the CAT scan, and the presence of chronic bronchitis and comorbidities.

Within all of these domains, they have developed five grades. The spirometry grade zero, or SU zero, means that their spirometry values are normal, but they have symptoms that require treatment. The spirometry grade U is undefined. They have their FEV1/FVC ratio at more than 0.7, which normally you would not classify these people as having COPD. Classically, they have also been categorized under a restrictive lung disease, but they have seen that some of these people do need treatment that is relevant for people with COPD. Then, the other grades,1-3, are based on the FEV1/FVC ratio. 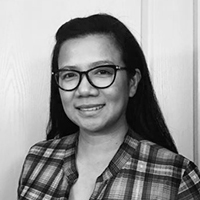 Camille Tovera-Magsombol is an OT Clinical Specialist at NYU Langone Health Rusk Rehabilitation inpatient unit. She has led quality improvement projects that aim to improve service delivery to patients with chronic diseases such as COPD, diabetes, and low vision. She advocates for increasing the familiarity, competency, and confidence of OTs in the field of cardiopulmonary rehabilitation. As part of this advocacy, she has presented on these topics both within the medical center and at the American Occupational Therapy Association annual conference.

1 https://www.occupationaltherapy.com/ot-ceus/course/living-and-breathing-with-copd-4381 Living and Breathing with COPD: The OT Role Chronic Obstructive Pulmonary Disease (COPD) is a prevalent disease and comorbidity of individuals being seen in occupational therapy. The occupational therapist is uniquely qualified to promote improved quality of life of individuals with COPD. However, as practitioners, we need to fully comprehend the pathophysiology and different evidence-based treatment strategies to promote optimal living for individuals with COPD. This short course aims to fill this knowledge gap and provide foundational knowledge and treatment resources for practitioners. auditory, textual, visual

The Lymphatic System and Yoga: Integrating Holistic Strategies into Therapy