Thank you for participating in this course on motor skill acquisition for optimal occupational performance. Today, I'm going to be presenting this topic from a pediatric perspective. However, for those of you who work with adults, this information is still applicable across the lifespan.

I want to start with the idea of a working hypothesis. Many people tend to equate a hypothesis with research. However, we can use hypotheses when working with our clients. During the assessment process, we typically begin by thinking about what is going on with each client. As we continue to work with a client and reflect on their performance, we refine our process and make adjustments as needed. Another way to use a hypothesis is to think about some of the collective themes and trends that you're seeing with your clients. How do those trends have an impact on client results and performance?

In my experience, OTs are generally not involved in the transition process (e.g., transitioning a child with autism into adulthood, or into a work environment). Similarly, with some of the individuals we treat in the clinic with more physical-based disabilities, we see success in the clinic, but those skills are not being generalized into other environments (e.g., school, home, work, community).

Why is this generalization not occurring? My hypothesis is that if an individual stays on the cognitive level with a task, that individual will be unable to achieve strong occupational performance within that task or occupation. This has negative consequences with respect to participation, transitioning, and social engagement.

What is motor control? Motor control is the output of motor ability or having controlled coordinated movements. In this context, coordination is the speed, efficiency, and ease with which someone can perform a motor task.

What is motor learning? Motor learning is learning how to do motor skills so that you can eventually have the motor control. For example, if you're thinking about math, you learn how to add the numbers together. The control part would be that you could do a math problem at the moment, perhaps in your head. That's what we're thinking about: learning it and then having motor control. Motor control is also the analysis of how someone is able to have this motor outcome.

One concept that I want to discuss today is that of dynamic systems theory (also known as dynamic action theory). In Figure 1, you can see three overlapping circles with the words task, environment, and individual. In order to reach optimal motor performance, all three of these things need to work together. Where they all meet in the center -- that is when optimal performance can be achieved. 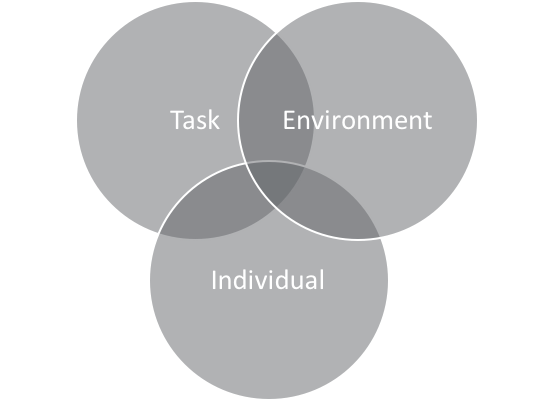 Why is this important? Dynamic theory suggests that a new movement emerges due to a critical change in one of those three systems (individual, task, and environment). A control parameter is a variable that regulates change in the behavior of the entire system. For example, velocity could be a variable that regulates change. If a person is walking, and they increase their velocity, they can change their gait to a trot or a gallop. That's one aspect of the movement that creates change.

Movement is an emergent process. Dyscontrol can be treated. It's hierarchical and systems-based, involving the three systems of the individual, the task, and the environment. In occupational therapy, this is a task-oriented and evidence-based approach. If we're being true occupational therapists, we view occupation not only as the end result but also the means to achieve our end result (Shumway-Cook & Woollacott, 2016).

When thinking about implementing the dynamic action theory with our clients, there are some positive outcomes that can result. We have the ability to:

There is a wide body of evidence to support task-oriented approaches. In 2009, Smallfield and Karges conducted a study and found that "occupational therapists use pre-functional activities that aim to improve performance skills and body structures more often than occupation-based activities that incorporate meaningful activities into therapy sessions." In other words, OTs were not doing an effective job of using occupation as a means to an end; they were doing more pre-functional activities with their clients. As a result, clients were not achieving high enough performance levels in therapy, and consequently, the skills were not being generalized outside of the clinic.

In the evidence, motor control has been identified as a significant concern for many of the populations that we treat. In pediatrics, as well as adults, there are all sorts of motor issues that we see with our clients. There are motor issues related to ADHD (Kaiser et al., 2015), ASD (Ewen et al., 2016), dyspraxia or DCD (Adams et al., 2014), and TBI (Risen et al., 2015), among others.

In 2009, Zwicker and Harris conducted research showing that motor learning was being applied in adult occupational therapy, but it was slow to gain popularity with pediatric populations. This is an interesting finding because, in pediatrics, we tend to have a longer time to work with children, so we really don't have an excuse not to get children to these higher levels of control.

Let's break down those three components one step further. When looking at the task, we need to assess whether it is a mobility task, a stability task, a manipulation task, or a combination thereof. In addition, when working with an individual, we need to think about their cognition, their sensory perceptions, and also their actions. With regard to the environment, we need to take into consideration whether it is a regulatory or non-regulatory environment. We will go into greater detail about these sub-components coming up shortly.

Meet Xavier. He loves YouTube videos, swimming, and playing with his dog. He’s a math “whiz”. He also has dyspraxia and has a difficult time with motor planning with poor body awareness, difficulty with sensory processing, and impulsivity. Xavier becomes frustrated easily and tends to avoid any motor challenges. He seeks movement to avoid stationary balance challenges, often pretending to fall or purposely be silly instead. He would like to learn how to do jumping jacks so he can do calisthenics with his karate class. He also wants to be able to dribble a basketball for P.E. games. Xavier is in 4th grade and is 9 years old.

Xavier's characteristics are typical of what we might see in a pediatric client who has sensory issues, dyspraxia, stationary balance issues, and stationary postural control issues.

The motor tasks that Xavier deems as important to achieve are dribbling a basketball for gym class and doing jumping jacks for calisthenics in his karate class. When we think about performing tasks, they can be described on a continuum of less challenging to more challenging.

The less challenging tasks have the following characteristics:

One of Xavier's goals is to do jumping jacks. Jumping jacks require a lot of mobility. They're going to be a little bit more challenging because you're moving your arms and your legs at the same time. The attention level is going to be higher. The object that you're moving is your body, so it requires more gross motor manipulation than fine motor. The other thing you have to think about is whether or not it's closed or open. Is it predictable? With Xavier, this task is probably a little bit more on the unpredictable or less controlled side, because you've got two halves moving together. You also have to think about whether it is discrete, with a beginning and an end. This one has a beginning and an end; each jumping jack counts as one rep, so it would be considered a serial task. Since it's less challenging in some aspects and more challenging in others, this task would probably fall in the middle range of the continuum.

If we wanted to make it more simple, to start with the less challenging aspect, we could move the stability piece and instead of jumping, we could have Xavier step out one foot and focus more on the arm movements. Or, you could have him lean against the wall, or have him lie down on the floor.

There are aspects related to the environment that can be considered either regulatory or non-regulatory. Regulatory involves all of the aspects of the environment that are necessary for successful performance of the task involved. An example would be putting on a shirt while sitting on the edge of the bed. The aspects that would be regulatory are the texture of the shirt, the size of the openings for the head and the arms, the buttonholes, the size of the buttons, and what types of buttons they are. Other aspects would include the firmness of the bed, the height of the bed, and the type of floor. All of these things are necessary to consider for successful performance.

Non-regulatory aspects of the environment are not integral for the performance of the task; however, they can be distracting. In our previous example, the color of the shirt doesn't matter, but if the child doesn't like the color of the shirt, that could distract him or her from performing. The smell of breakfast coming from the kitchen might be distracting or bothersome. Noise in the hallway could be distracting. These are things to consider when you're thinking about environmental aspects.

Procedural memory is a lesser involved skill, usually developing by 10 years of age, whereas declarative memory continues to mature into young adulthood. The more rapid the maturation of procedural relative to declarative memory may promote learning in children (Finn et al., 2016). When tasks become more habitual for children, that's when they have more success in the school environment, because they can now learn and focus on what they're doing.

Levels of Analysis of Movement

As the therapist, when you analyze movement, you want to think about three aspects: 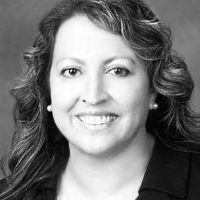 Nicole Quint has been an occupational therapist for over 15 years, currently serving as an Associate Professor in the Occupational Therapy Department at Nova Southeastern University, teaching in both the Masters and Doctoral programs. She provides outpatient pediatric OT services, specializing in children and adolescents with Sensory Processing Disorder and concomitant disorders. She also provides consultation services for schools, professional development, and special education services. She provides continuing education on topics related to SPD, pediatric considerations on the occupation of sleep, occupational therapy and vision, reflective therapist, executive functions, leadership in occupational therapy and social emotional learning.

Making Sense of Meltdowns: How to Identify and Intervene for Children with Sensory Based Disruptive Behaviors